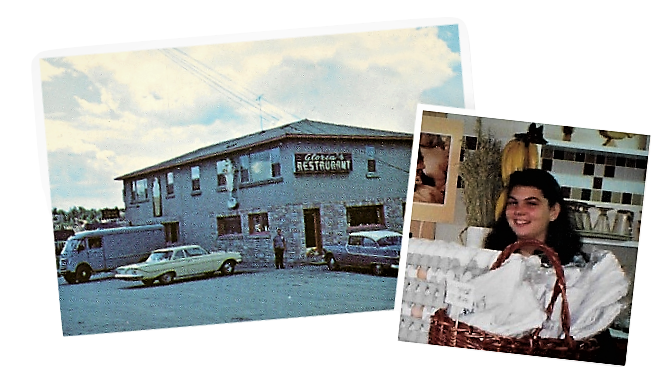 At Gloria’s Restaurant we pride ourselves in bringing a tradition of quality and comfort. Sudburians have been enjoying Gloria’s hospitality and great food for more than 65 years. Our breakfast has been voted the city’s best, every year since 2015.

Since that day in 1952 when Arnel Michel and his wife decided to buy a restaurant from Gloria Richard, people across the city have been enjoying quality food and friendly service every day at the corner of Regent and Bouchard streets.

Arnel built the business steadily over the years and, in 1970, working with three other partners, tore down the original building and founded the Regency Mall. Arnel went on to other big projects, including founding the Moonglo subdivision, but Gloria’s stayed in the family. Arnel’s son Mario took over in 1989 and his other son Bruno ran the restaurant from 1996 to 2017.

In October of 2017, Bruno sold Gloria’s to Peggy Sgouros and her family. Peggy, a Montreal native with many years of experience in the hospitality industry, moved to Sudbury in 2008. At first she owned and operated a well known Greek restaurant in town for a few years. Nowadays she will likely be the one to greet you when you come in to Gloria’s with a friendly smile and a big hello. You see, by now Peggy and most of our staff know many of our customers by name. We hope to learn yours soon!